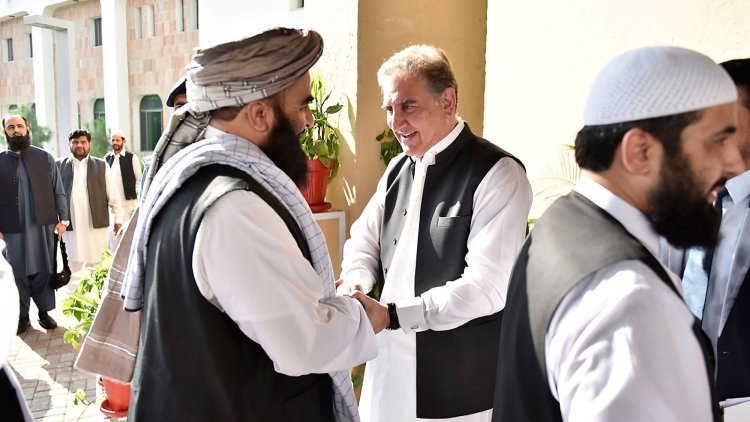 The Pakistani Foreign Minister visited Afghanistan for the first time since the Taliban came to power in August amid ongoing tensions over transport links between neighboring countries. Shah Mahmood Qureshi traveled to Kabul on Thursday to discuss the situation on the Chaman border.

Qureshi, one of the major trade transit points between Afghanistan and Pakistan, has been closed for more than two weeks, causing serious problems for truck drivers and exporters. On cross-border movement and trade, and that a Taliban delegation will visit Islamabad in the coming days to complete the resolution of the problems.

"There were extensive talks with the Afghan Taliban leaders, in which the prime minister and almost all cabinet ministers took part." Qureshi said. Qureshi was accompanied by Faiz Hammed, the outgoing head of the Pakistani Inter-Services Intelligence (ISI), who is on his second visit to the Afghan capital since the Taliban came to power, and progress has been made in solving outstanding problems. "We are very confident that all of our trade problems will be resolved very soon and that the borders will be reopened," he said.

The neighboring countries had not been able to solve problems related to flight connections and the control of cross-border cargo in the past few weeks. Pakistan has suffered the aftermath of four decades of instability as armed groups flourished along the 2,670 km long border between Pakistan and Afghanistan.

The closure of the border on security concerns has affected Afghan fruit growers near the southern city of Kandahar, pomegranates and other export products rotting away from their trucks Unable to Reach Markets Across the Border Pakistan International Airlines, the only international airline operating regularly in Kabul, also suspended flights last week and complained about interference and harassment of its staff by Taliban officials.

After the Taliban came to power, Qureshi is the third foreign minister to visit Afghanistan after Qatar and Uzbekistan. Countries that recognized the previous Taliban regime in the 1990s is s Islamabad has not officially recognized the government of Kabul, but has actively campaigned for international engagement with the Taliban to provide humanitarian aid to the country.

Low level foreign assets of the Central Bank of Sri Lanka! What's next?